A couple of years ago, I toured a home that was for sale and built by esteemed architect Louis Kahn. It was a lovely 3-bedroom, 2-bath, very modest-sized gem of a house in Elkins Park, a suburb just outside the city limits of Philadelphia. At that time, I was looking to move, and I found this house very charming and beautiful. Everything about this house “fit” within it. The yard was well tended with mature plantings and a small stream. The price was not out of reach. But, in the end, it was just too small for our family. But I’m so glad I took the opportunity to go see it because it reminded me about an important lesson: windows can make or break a house, even an architecturally significant one.

If you visit the Louis Kahn Wikipedia page, you can see the house I am talking about on the right-hand side, and I’ve included an image in this post. 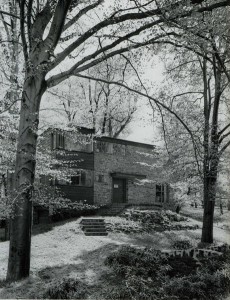 When I saw this house, it was almost completely original and “un-remuddled.” It was clear the homeowners were aware of the architectural significance of their home and were trying to be very careful about making changes during their stewardship. But there was a serious problem. Originally, the house had steel-framed, single-paned window units. They were large, and there were a lot of them, as you can see in the image. Needless to say, these were horribly leaky windows! We could even see some minor staining had occurred on the interior paneling near some of the old windows.

It was obvious the owners of this home had problems with these leaky, old-style windows. They were probably cold in winter and paying large heating bills. We were told by the mother in law, who was living in the home with the owners and gave us the tour, that they had called in a very well-known local window provider to replace some of the original units with newer, double-paned “modern” windows. We politely nodded while she told us about this “upgrade” that had been made to the house.

The good news is there are some great semi-custom, factory-direct, energy-efficient options that can make much better — yet still affordable — investments in significant homes like this one. There are also several local shops that can make very custom, very exact, historically correct windows with modern energy-efficient function for a specific house, as per the architect’s original intent.

Don’t make the same mistake that these homeowners did. When making your next window investment, be sure your provider is well versed in choosing the right products for your home’s specific style and needs. Otherwise, you will likely be wasting money and possibly devaluing your property.