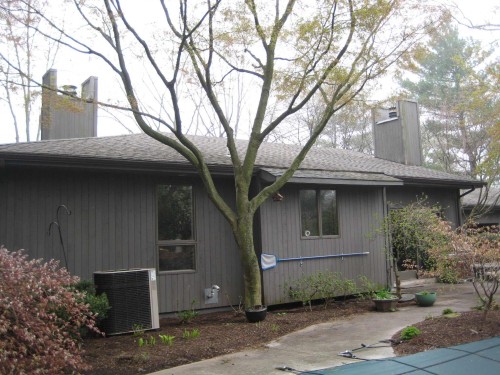 When working on old houses, problems invariably arise. More often than not, they involve compromised systems in the home.

Recently, for example, we worked on a very nice mid-century house, where we gutted and replaced the old kitchen. In the process of that project, some of the home’s systems came up for special scrutiny. Structural problems were found in the roof rafters over the kitchen. They were all cut by the builder 4 feet too short to reach out over the kitchen bump out, where the sink was located. The builder tied on to the rafters a few 4-foot lengths of 2×4, to extend the roof there. That resulted in the bump out dropping over an inch. While we had the ceiling open, it was a fairly easy fix for us to create properly sized rafter tail extensions and jack up the droopy bump out.

All of the water pipes in the house were crossed by the previous homeowner for some reason, and run in the unheated attic. The clients said they had never had frozen pipes, so we didn’t relocate them but did let the clients know that the attic was a weird place to run them. In the process of re-plumbing their new kitchen, and cleaning up the pipes, we could see there and in the basement, we created a pipe bang in one of the bathrooms on the far side of the house, even though we hadn’t done any work in that bathroom. The simple explanation was that our effort to make the plumbing more logical locally resulted in pressure banging elsewhere in the less logical section of the building.

So what to do? The client was not happy with the bang, but she understood it was not a mistake on our part. However, we didn’t want our clients to have to live with the noise, either. So our plumber set to work trying to locate the pressure bang and fix it. We knew it might take a few tries to figure it out, and sure enough it did. It’s complicated, but essentially metal bangs on metal in the shower faucet body when the water elsewhere in the house is shut on or off. So now we know we needed to replace that shower faucet with a new one.

Most contractors would not have plugged away at these problems until they were resolved. They would have completed what was on their task list, collected their check, and gone home. But we hung in there to make things right. Sure, the clients can get frustrated by these kinds of problems. (“Why did THIS have to happen? Why isn’t THIS fixed yet? What did my contractor do to cause THIS?”) But we were lucky to have a client who understood that chronology does not equal causality. She trusted that we were working in her best interest. She asked good questions and listened to what we explained.

This kind of attention and service costs more, but, in the end, which would you rather have: A covered up, droopy kitchen bump out and plumbing bang, or your house fixed properly?

Many people think of furnishing their home as a single expedition to a big-name supplier where they can buy a “set” of furniture to fill their rooms. They plop down their credit card and call their room “done.”