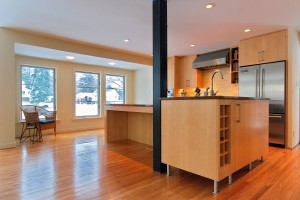 In the world of new construction, the mantra is “small is the new big.” This means that people who are building new homes appear to be tired of — or can simply no longer afford — the ostentatious 5,000+ square foot McMansions that were so popular during the last decade. In our business, however, where we work on older homes in and around metro Philadelphia, the opposite is true. We get a lot of calls from folks requesting additions for their homes. They simply want and need more space.

The area in which we work, including Center City and its neighboring small villages, features homes that were built from the 1700s to the 1900s, surrounded by rings of newer developments that were built between the 1920s and the 1990s. And the footprint of a typical row house that we renovate, especially in the city and small towns, is quite small at about 1,200 square feet. Some as small as 700 sf, and others in neighborhoods like Head House, where wealthy tradesmen lived in the 1700s, are as large as 2,800 sf or more. These larger houses had ballrooms and housed staff as well as homeowners. But these mansions are the exception.

It’s not uncommon for the smaller row homes to have only one or 1.5 bathrooms, which are often located on an upper level or on the back of the home in a flimsy “shed” addition. In the old days, these sheds housed an outhouse and pantry, which were often later converted to a flush toilet and laundry room, and possibly kitchen space, as well. It’s common for these additions to have no foundation at all and sit on a concrete slab or a shallow rubble wall. Typically, these areas have been poorly renovated for many generations, so they are a real mess and do not meet code. These shabby additions often have to come down before we can add the properly designed and built spaces the homeowners desire.

Along with the shed issues, these homes typically also have minimal closet space that is often awkwardly arranged.

Given these conditions, it’s not surprising that our clients often find themselves needing additional square footage to meet their needs. The most popular addition requests we get are:
kitchen/family room/bathroom combos
master suite/bathroom combos
conversions of garages into office space or guest quarters
conversions of sunrooms and porches to four-season rooms
mudrooms/laundry/powder rooms
opening of interior spaces/reconfiguration of closets and bathrooms